The Rugby Football League Challenge Cup is a prestigious event held in the United Kingdom since 1896. Recently, Ladbrokes became a sponsor of the unique rugby tournament. The Challenge Cup is considered to be the only rugby tournament that involves amateur, semi-professional and professional clubs. Ladbrokes has signed on to cater to the growing fan base of the competition.

The partnership between the British bookmaker and the Rugby Football League has been extended for one year. This was announced in the week leading up to the 2017 Cup Final by Ladbrokes, where the Wigan Warriors will face Hull FC for the title. Read on for more about rugby betting for Kiwi gamblers. 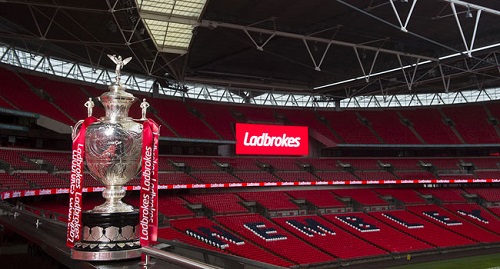 Roger Draper, CCO for the Rugby Football League, commented on the extension and said he was ‘delighted’ by Ladbroke’s decision. He also stated that the extension was ‘great news for the sport’ and a commitment to the Challenge Cup tradition. To promote the Ladbrokes Challenge Cup, the sports book will be hosting promotional activities during the season.

Ladbrokes’ Chief Executive, Jim Mullen, gave a statement about the extension and partnership. ‘Our decision to sponsor the Challenge Cup was an easy one.’ He said that they (Ladbrokes) were excited by ‘passionate sporting events’ and that the extension ticked ‘those boxes’ for the bookmaker. More so, he claimed that Ladbrokes ‘play hard to win,’ which is what the Challenge Cup ‘is all about.’

Betting on the Challenge Cup

Kiwi gamblers who want to get in on the action can bet on either the Wigan Warriors or Hull FC in the final match. The match will take place at Wembley Stadium, where Hull FC will defend their championship title. However, the Wigan Warriors look like the favourites to win, with 19 Cup titles under their belts.

NZ players can bet on Ladbrokes’ site or just enjoy the action on Sky Sports. Due to the Challenge Cup, the network has broadcast a ‘record number of live games.’ So, our Kiwi rugby fans won’t have to miss out on a thing with live-streaming also available. Keep up with more exciting sports betting news at NZ Casinos.