Logies 2017 – the best and worst of Australian television was on show last night. The Logies 2017 started off with a few digs at well-known news anchors. The awards show then paid tribute to John Clarke, a well-loved New Zealand satirist who passed away this month. 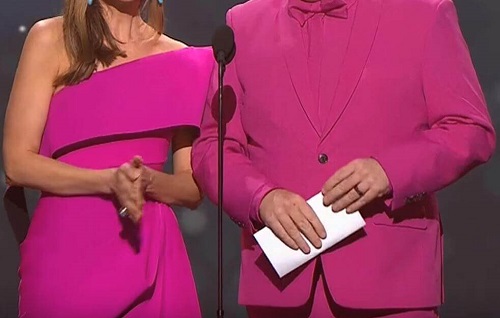 Just as nominees and guests were settling in, the presenters for most outstanding comedy came onstage. Peter Helliar and Kat Stewart entered from opposite sides of the podium. Stewart wore a fuchsia gown, matching Helliar’s fuchsia two piece suit. Anchor Amber Sherlock took the skit in stride as the pair argued over getting Stewart a jacket.

Eventually, Stewart was handed a striped poncho before the skit ended. Once offstage, the pair started up again by taking a dig at red carpet interviewers. “Of course, I need to ask, who are you wearing?” Helliar questioned. Stewart’s reply was ‘Poncho Playhouse’ before turning the question on Helliar. The routine was a reference to the #AskHerMore campaign for sexist questions on the red carpet.

Other funny moments at the Logies 2017

Before the event started, Real Housewives of Melbourne star Gamble Breaux, had a mishap on the carpet. While being interviewed, the reality star chipped her two front teeth on a microphone. Jewel Chic reported Megan Castran accidentally socked the star in the mouth during the interview. Luckily, the reality star laughed it off and forgave the reporter with a selfie. Hopefully, a trip to the dentist will sort out the trouble before the next season.

And now for the most anticipated part of any awards show, the winners. Samuel Johnson won his first Gold Logie for his role as Molly Meldrum in Molly, to which he dedicated his win to his sister. Connie Johnson is currently battling cancer, and serves as ‘inspiration’ for her brother. Jessica Marais won Best Actress and dedicated her silver Logie to her daughter.