It’s been a rough week for EA Games after players complained that their new Star Wars game, Battlefront II, was ‘pay-to-win.’ By using micro-transactions in the game, players could pay real money for digital items and rewards from loot boxes. However, as many pre-release players found out, these in-game transactions were impossible to avoid in the multi-player title.

It’s common practice for online gaming operators to offer in-game currencies and randomised rewards for players to boost their games. EA Games, on the other hand, took things a little far by gamer standards. All main characters from the movie franchise were locked, and many other items had to be bought with real money. More so, complaints by online gamers led many regulators to reconsider whether or not these random boxes are gambling. 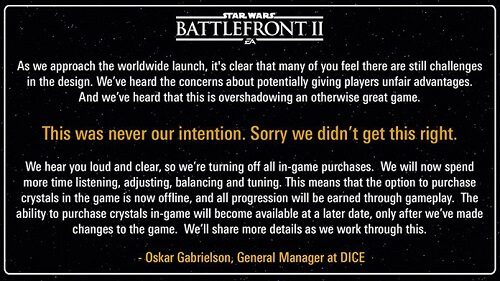 To earn all the locked items that players could receive in loot boxes, a gamer would have to play Battlefront II for over 4000 hours. What’s more, they would have to spend thousands of dollars to randomly receive these rewards without earning them. EA Games’ solution was to cut the locked item prices by 75%, but gamers still weren’t impressed.

To make matters worse, those who paid extra and played a pre-release game discovered the issues with unlocking main characters. This led to the first ‘most down-voted comment’ on Reddit, and bad reviews ahead of the official launch last Friday. As a result, EA Games made more changes to the game, removing micro-transactions altogether.

A statement released on Twitter by Oskar Gabrielson, a DICE General Manager did no good for angry players. He said that it ‘was never our intention’ to overshadow the game with micro-transactions. The tweet (pictured above), that was published on the verified EAStarWars account, seemed insincere to all involved. This is because EA Games are known to release unfinished, unrefined games right off the bat.

All the publicity ahead of the release doesn’t seem to have influenced gamers to purchase Battlefront II. Instead, they called for refunds and for other players to avoid the Star Wars multi-player game. The Belgian Gaming Commission has also launched an investigation into loot boxes to determine whether or not they promote gambling. Experts have speculated that the addictive nature of online video games could influence minors playing these games to turn to gambling.

Randomised rewards in video games are not new, but EA Games has created an issue by charging so much for them. The move by Belgium could signal the end of these rewards, if the investigation proves that they are a form of gambling. At the moment, it’s safe to say that micro-transactions are in trouble. Keep visiting NZ Casinos for more gaming and gambling news.