The recent high-profile cash fight between Floyd Mayweather and Conor McGregor ended in a knockout. However, a Paddy Power tweet long before the fight has become a big issue for fans. The controversial bookmaker decided just days before the fight to cash out their Mayweather bets. So, the sports book tweeted out the news with the words ‘you should always bet on black.’ 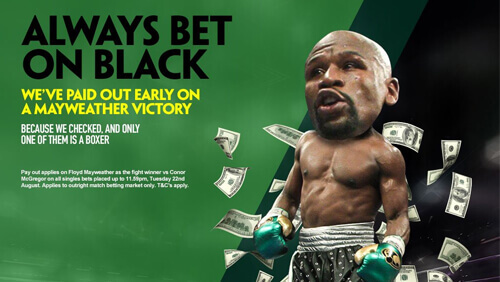 The tweet has since gone viral for further inciting racism around the fight. Conor McGregor’s comments before the fight, telling Mayweather to ‘dance for me boy’ were also slammed for racism. Tensions were high by the time Mayweather took home his 50th undefeated knockout win. However, Paddy Power have defended their words and claimed that Mayweather is proud of his identity.

According to the Irish bookmaker, the tweet was not sent out in an ‘insulting way.’ Additionally, they claimed it was simply a fact, just like Mayweather’s undefeated reputation.  This was not the first time Paddy Power has been accused of racism. In fact, before the 2016 US elections, they revealed a billboard with Barack Obama and Donald Trump asking if ‘orange is the new black.’

This was also not the first time that Paddy Power has cashed out early. During the same 2016 election, they paid out Hillary Clinton bets claiming that she would win. Unfortunately, Clinton did not receive the Electoral College vote, so this was only half-true. The payout amounted to ±NZ$3.29 million. Their Mayweather payouts totalled ±NZ$373 00 ahead of the fight.

In a statement from the company, a spokesperson said: ‘Patriotism aside, we are paying out early on a Mayweather victory… because we checked, and only one of them is a boxer.’ Luckily for Paddy Power, Mayweather won the bout in the tenth round. For more Kiwi gambling news, visit NZ Casinos.