New Queensland Casino on the Cards for Aussie Gold Coast

Queensland – a new casino resort has been proposed by Caesars Entertainment Corporation, a USA-based casino operator. The AU$3 billion (NZ$3.23 billion) integrated resort will join twelve other resorts on the Gold Coast of Australia. More so, Caesars Entertainment has entered talks with ASF Consortium as to running gaming operations at the proposed resort. 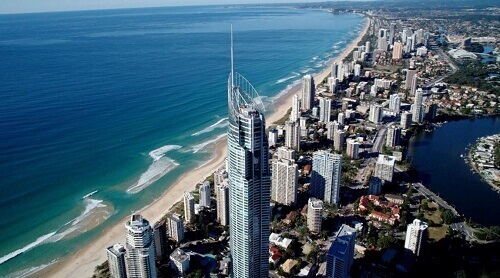 Caesars Entertainment is one of the most successful casino operators, with 28 land-based casinos operating today. The majority of their locations are based in American cities like New Orleans and Las Vegas. Some of their international resorts include Cairo, Egypt and Vũng Tàu, Vietnam. The firm is one of many operators vying for another Gold Coast location. The operators are all in talks with ASF Consortium, a Chinese-owned operator with interests in Australia.

Additionally, Caesars Entertainment will be up against some of the biggest names in Aussie casino operations for a coveted integrated resort.  Contenders include Crown Resorts and Star Entertainment, each with locations in Brisbane and other Queensland cities. The new resort may be located on the Southport Split, a popular tourist destination in Gold Coast City.

Artist renderings of Caesars’ planned resort have been released to the public. The renderings include designs for three luxury hotels, a world class casino, luxury apartments and conference rooms. Additionally, there are plans for a theatre and signature restaurants. However, local officials are opposing new resorts in the state of Queensland.

The premier of Queensland, Annastacia Palaszczuk, formally rejected plans to add a resort to Gold Coast City in a public statement. However, ASF Consortium had previously been described as ‘an ideal candidate’ for a new resort in Gold Coast City.

Current legislation will allow for only one new Queensland Resort, so the race is on for competitors. More so, there is a possibility that Caesars Entertainment, Crown Resorts and Star Entertainment may bid separately from ASF. In New Zealand, no more casinos will be built under gambling laws. So, watch this space for more casino news.