SCOOP, or Spring Championship of Online Poker, is the seasonal poker event offered by PokerStars for players across the globe. The final event of the tournament was the US$10 300 No Limit Hold’Em game. PokerStars offered low, medium and high stakes games to players of all bankrolls. Roughly 693 online poker gamblers took part in the event which spanned several weeks. British Poker professional Charlie Carrel was the first place winner at the final main event. 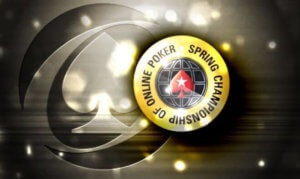 The seasonal online poker tournament is one of the biggest in the world, with hundreds of players taking part. However, in some regions, PokerStars had to hold separate tournaments for players. For example, New Jersey had a separate tournament with a US$1.2 million jackpot. More so, there were 35 events starting on 6 May and ending on the 22nd of this month.

One of the draws of the SCOOP tournament was the guaranteed US$1.2 million in prize money. The spring tournament is in its second year and offered different versions of poker. These included the following popular variants of poker:

The main event for each tournament spanned two days with different buy-ins depending on the table stake. For low stakes players, the buy in was US$50 while high buy-ins were US$500. High stakes event players went head to head to US$200 000 in guaranteed prize money. Low stakes players were guaranteed US$30 000.

The final results for the main event came after a high-stakes game. Players such as Emil Patel, Ola Amundsgard, Gordon Vayo, and Connor Drinan were all vying for the guaranteed pot. Additionally, Carrel went up against Harrison Gimbel in the heads up round. This round is the big reveal of a player’s cards in Hold’Em, and decides the winner of the game.

At first, it seemed like Gimbel would steal the win with a K-9 off-suit, but Carrel called his bet with J-8 suited clubs. The table ended with an Ace, 10, 5, Jack and 5 giving Carrel the cards and cash to seal his win. For more about online poker and how the different hands rank, visit our online poker guide. Soon you could be winning as big as these pros at the next SCOOP event with our tips and tricks.