Travel back in time to the city of Pompeii with Realtime Gaming’s new slot, Vulcan. This Roman Empire-themed pokie has five reels, 25 paylines, and plenty of excitement. What’s more, this is a progressive jackpot game. So, get your bets ready and be prepared to go on an adventure worthy of the ancient heroes of Rome.

Before clicking spin, we recommend setting the bet sizes and lines. These can be notched up or down with the arrows. The auto-play and spin buttons are easy to find on the bottom of the interface. Alternatively, the Slot Bet and Win monitors are at the top of the screen. Coin values range from NZ$0.01 to NZ$0.25. 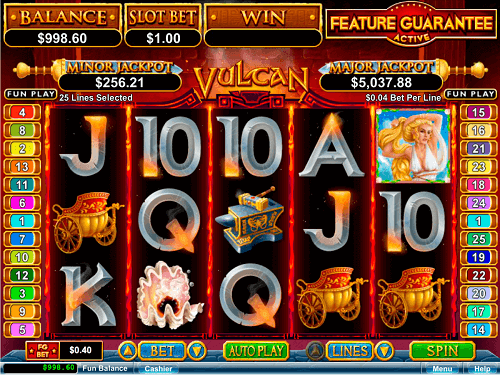 Vulcan is the god of blacksmithing and fire, which is why the anvil and hammer are part of the game. Symbols in Vulcan are thematically dazzling. Fiery chariots, anvils, and steel card suits grace the reels. Keep an eye out for Vulcan on reels two and four, as he represents the Wild symbol. When combined with other symbols, Vulcan multiples wins by three. The goddess Venus is represented both in her human form and animal form – a clam shell.

The volcano, Vesuvius, is the Bonus Symbol. Landing three volcanoes activates the Free Games mode. Players will be awarded 15 spins at the start of the feature. All wins are doubled during this feature. 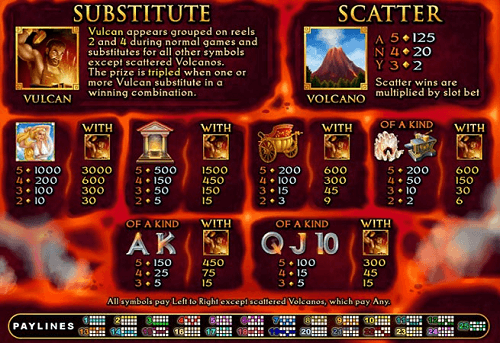 Overall, Vulcan is a good pokie for players who want to spice up their gaming. The multipliers, symbols, and feel of the game are exciting. Sadly, it cannot be played for free, as it is a progressive jackpot. For these reasons, we have rated Vulcan by Realtime Gaming at four out of five stars.