Mega Gems online pokie is now available at top Betsoft casinos in New Zealand. As a five reel, ten payline pokie, this is perfect for low stakes players. Keep in mind that this is a Flash Player game, but it can be enjoyed at Instant play casinos. Mega Gems has a neon-arcade theme, and features gem symbols with two special reel symbols.

This pokie does not offer free spins, but there is a progressive jackpot. However, this jackpot can only be won when bets are set to max. So, keep your bankroll in mind while using the Max Bet Spin button. 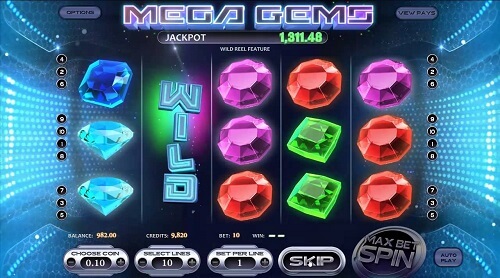 In Mega Gems, players will need to match higher paying gems on the reels while they spin. Each gem is valued between 50 coins and 2500 coins. The highest paying gem is the dark blue square gem. Landing three or more of any gem on a payline with a Wild Symbol reel will make the Wild sticky. This will trigger another spin for extra wins when the Seven Octagons appear on reels two, three and four.

Another special feature is the progressive jackpot. When the word Jackpot appears three times on the same reels. If the Max Bet was used, this will pay out the jackpot. This can go as high as 200 000 coins for a lucky player. Any matches across the paylines will add to the jackpot while playing.

While Mega Gems is not the most exciting game by Betsoft, it still has a thrill for players. After all, the progressive jackpot ups the ante while players spin the reels. Added to this, the style of the game is great, and it plays smoothly on any device. Still, it would be nice to have more multipliers or features. For these reasons, we have awarded Mega Gems four out of five stars.

Other Pokies from Betsoft