Game of Thrones is one of the most popular series in the world, especially New Zealand. Based on George R.R. Martin’s novels of the same name, the HBO show has been a worldwide phenomenon. Now, Microgaming has released a fantastic video pokie so that fans can try their luck.

Pledge your loyalty to a house and get ready to win with this online pokie. However, none of the show’s characters are featured on the reels. So, get ready to enjoy this amazing online pokie from one of the best game developers in New Zealand. 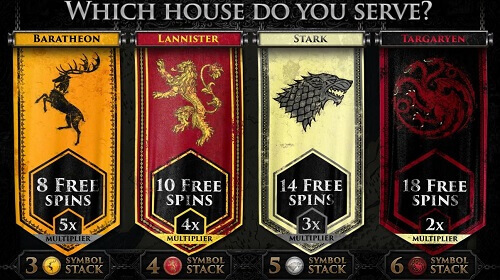 First off, Kiwi players can choose between two modes on this online pokie. They are the 15 payline mode and 243-ways to win mode. It’s up to the gamblers to decide on which version they’d like to play. Keep in mind that the 243-ways version offers a 6 050 000 coin jackpot, while the 15 paylines versions offers 750 000 as a jackpot.

While none of the infamous faces of the Game of Thrones cast appear on the symbols, this pokie stays true to its medieval theme. Look for the Iron Throne, which is the scatter symbol, and get ready to get set prizes if you land two. Prizes range between a 1x and 100x your bet!

The Game of Thrones logo acts as a wild in this game, and will stack up on the reels. So, one spin may just be all you need to whistle the theme all the way to the cashier. Impressive prizes are waiting to be won with this exciting online pokie for Kiwi players. 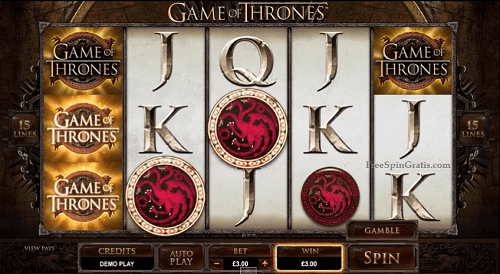 Finally, the most exciting features for this online video pokie are the free games that activate when players land three or more Iron Thrones. These can appear anywhere on the reels, and will offer players an important choice. Kiwis can choose to play as a supporter of the series’ four houses, or families.

Additionally, players can use a gamble feature that uses a coin flip as opposed to the usual black or red card suits. With all these epic features, you could win the Iron Throne and more with the Game of Thrones Pokie.

In a nutshell, Game of Thrones is a great themed video pokie for all online pokie fans. Gameplay and graphics take centre stage to bring both the series and this pokie to life. The choices available to players are off the charts, with hours of excitement waiting. So get spinning and who knows? Maybe you’ll be the next ruler of Westeros with a fabulous fortune behind your name thanks to Microgaming.