Searching for treasure has never been more fun than in Quickspin’s King Colossus pokie. This video slot has plenty of golden goodies for NZ players across five reels and 40 paylines. The fictional king is the main draw of this pokie, and his treasures feature gold with amazing jewels. Exploring the reels will reveal two bonus features and plenty of bonuses. Before playing, it’s best to set your bets in the game, which range from NZ$0.40 to NZ$120. Click on the total bet button to set your coin value. All spin buttons sit on the right of the screen, with the biggest being the normal spin. A smaller spin button will allow you to automatically spin and win. As usual with Quickspin, there is also a fast-forward option to see only wins.

King Colossus doesn’t have a bonus game mode, but there is a free spins round. This can be triggered by landing three Bonus symbols on reels two, three and four. Triggering the round automatically gives players five spins. In this mode, more can be earned if you land the Golden Lion wilds. Both icons feature a golden lion, but they differ slightly. The side facing lion is a regular wild, while the front-facing lion only appears during free spins. Another important symbol is the King, who appears in both rounds. In the free spins mode, the King can expand to fill the second, third and fourth reels. This 3×3 wild can multiply all wins. Lastly, the +1 Symbol in this mode will add a free spin to the tally. 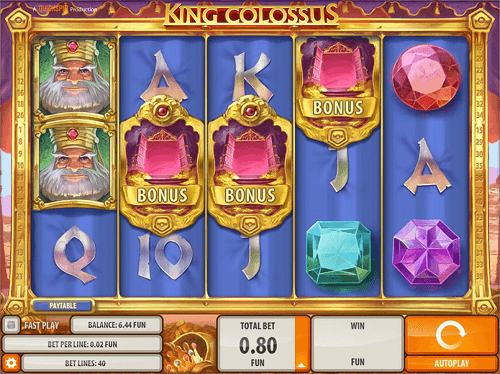 All in all, King Colossus is a great pokie game. The soundtrack, effects and graphics all add to the gameplay. Of course, the jackpot of 500 times the stake adds a lot to the excitement. Our reviewers loved the variety of symbols, and the extra features. For these reasons, we have rated King Colossus four out of five gold stars.