Progressive jackpots rarely create as much as excitement as NetEnt’s new Hall of Gods title. This pokie has a progressive jackpot, connected through all NetEnt casinos. What makes the slot so exciting is that the jackpot builds quickly. More importantly, the theme of the game follows famous gods from Norse mythology. Also, the game has a crisp animation style.

Hall of Gods has five reels, three rows and 20 paylines. We have to make note of the bet sizes, because only betting the maximum will ensure a full jackpot payout. Still, even small bets will payout in the millions for lucky Kiwis, courtesy of NetEnt. Set all bets using the controls at the bottom of the screen. Coin values range from NZ$0.01 to NZ$0.50. 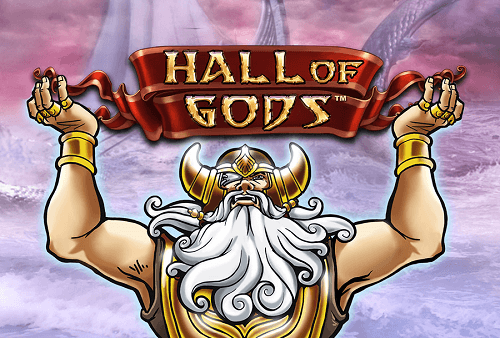 In Hall of Gods, players can look forward to some of the most famous gods in Norse mythology. These include Loki, Thor, Freya and Odin. Thor’s Hammer also makes an appearance as the Bonus symbol. Landing three Hammers on reels three, four and five will activate the bonus round. In this round, players stand a chance of winning one to three jackpots.

Click on the shields to reveal jackpot symbols or coin amounts. Match three Mega, Midi or Mini jackpot symbols to claim. Additionally, matching three coin values will also award wins. The highest possible jackpot in the bonus feature pays out 75000-coins. This feature can be activated during Free Spins.

Landing three Crow Scatters, or more, will activate Free Spins. Players can receive between ten and 20 Free Spins depending on the Scatters they land. All wins are multiplied by three in Free Spins. Further Scatter matches will award more spins.

Lastly, the Wild Dragon can substitute any symbol except for the Hammer and Crow. If the Wild Dragon lands on reels two to four, it will expand to cover the reel on a winning bet line. 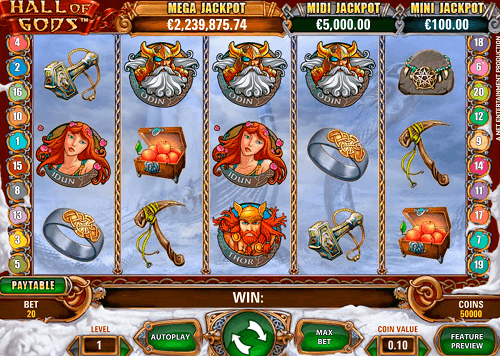 All in all, this is a fun game for players of any level. Hall of Gods has a lot of exciting features, and the jackpot constantly grows. What’s more, it has an average payout of 95%, give or take. If that’s not enough, the wins from just the game are substantial. For these reasons, we have awarded Hall of Gods a rating of five stars out of five.