Starburst is an online video pokie from developer NetEnt with some out of this world graphics. This unique five-reel, ten payline pokie is one of the best around at New Zealand casinos online. Watch out for the ‘Starburst’ Wild symbol and enjoy some of the best bonuses to go with it. Starburst is a low-stakes title, allowing players to select paylines, coins and levels to maximise their gaming experience. 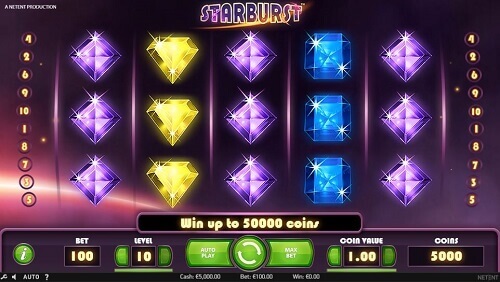 The theme of Starburst features a starry, jewel-toned backdrop with gem symbols across the reels. NetEnt have used a simple layout to keep NZ players entertained without overdoing their visuals. Wild symbols include the expanding Starburst gem, a blue seven planet and a golden ‘Bar’ planet. The Wild symbol only appears on reels two, three and four.

Some of the special features on this online pokie are available on the interface of the game. Kiwi players can choose to activate all paylines, or a handful, according to their bankroll. Like we’ve said, they can also customise the coin value and whether they’d like to spin the reels automatically. Other interface features include volume, settings for playing, and other options. This online pokie is available at all the best multi-platform online casinos in New Zealand.

Overall, this is a fun video pokie for Kiwi players to enjoy while sticking to their limits. More so, there are many bonuses featured by online casinos to enjoy on Starburst. However, the game does not feature scatters or multipliers. For these reasons, we give this NetEnt title a hearty four stars out of a possible five.