There’s been a lot of concern by gambling stakeholders surrounding sportsbook ads featuring soccer players from arguably the most popular league in the world. The latest team in the spotlight is Tottenham Hotspurs. The English team is affiliated with 1XBET. The sportsbook has a multimillion-dollar partnership deal with the London club signed last year August. As part of the agreement, the bookmaker is well within its rights to use the club’s brand along with its players on any advertisement for the sports betting site.

While the online sportsbook is not displayed anywhere on the shirt, they make use of the player’s likeness to promote their brand. They recently put up a billboard that raised a few eyebrows. This is just days after a verdict was handed to another sports betting site over branding a Premier League jersey.

A billboard in Kenya comes a week after the latest controversy featuring another sports betting website. The Football Association (FA) in England had ruled that the sportsbook violated its rules related to gambling. After the English Premier League club Huddersfield Town revealed their new kit featuring the Paddy Power branding across the shirt, the FA requested an explanation for the new jersey. The betting company confirmed in a statement that it would not display its brand so prominently on the shirt, along with urging other sponsors to join their initiative ‘Save Our Shirt’ campaign. 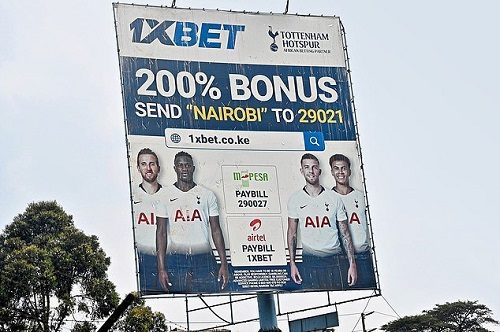 There is a lot done by the FA to minimise the spread of problem gambling. The rules relating to sports betting are very strict on players than on sportsbooks. The last player to get in trouble over appearing in a sportsbook ad was Everton defender Yerry Mina. The player collaborated with a Colombian betting company on an ad. The rules also prohibit players and managers from taking part in any bets. Former Liverpool forward Daniel Sturridge was banned for six weeks after being found guilty on betting charges. Keep it locked to find the latest gambling news in New Zealand.