Sir Richard Branson has announced the finalisation of a deal that will see the Virgin Group take over the Hard Rock Hotel & Casino in Las Vegas. The Virgin Group did not reveal the sale price. According to reports, Virgin Hotels Las Vegas will open in 2019. The British billionaire celebrated the closed deal at the venue with a poolside party on 30 March.

Branson revealed that ‘hundreds of millions of dollars will be spent transforming the property’. This includes 1500 room renovations and rebranding the casino as Virgin Hotels Las Vegas. This will be the company’s first venture into the land-based gaming industry, but they have some big plans. 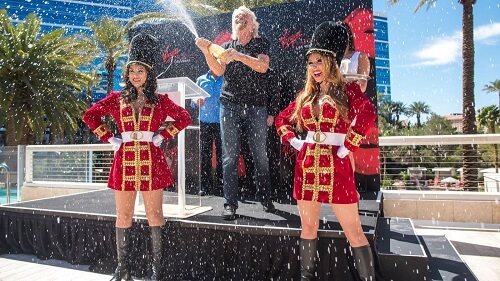 In a press release, the company said that a new casino would be ‘double the current size’ of the original gaming space. What’s more, there will be ‘multiple pools’ throughout the five-acre property. If that weren’t enough, the hotel giant plans to expand on other facilities such as bars, restaurants, clubs, lounges, and public spaces.

The refurbished property will operate through a partnership between Virgin Hotels and Bosworth Hospitality Partners. Other partners include Fengate Capital Management and Juniper Capital Partners. This partnership has assured future employees and the Culinary Workers Union Local 226 that they will ensure that the management will remain neutral if employees decide to unionise. In effect, they will promise not to harass or interfere with employee decisions.

Branson’s company has interests in almost every industry possible. The most popular branches include Virgin Atlantic, Mobile and the Virgin Records company. Their move into the gaming industry is not exactly new either. They operate a licensed online casino in New Jersey. However, this will be their first casino brand. What’s more, this will be their first hotel property since 2010.

While it’s not clear why Virgin Hotels chose to buy in now, the sale of by Hard Rock Las Vegas is motivated by a scandal. Hard Rock was involved in the Cambridge Analytica scandal last week. Where Facebook allowed the company to use customer data without permission. Hard Rock had done the same, by allowing the company to use mobile location data for targeted ads. The casino operator would then send texts to players entering the property.