Home » Betsoft’s Viking Voyage to be Released on 22 April

Betsoft’s Viking Voyage to be Released on 22 April

Do you love Viking-themed slot games? Well, then Betsoft has a treat in store for you. Viking Voyage is the newest pokie game to be added to the software operator’s catalogue. The game is due to be released on 22 April. It will see players travel across the seas on exciting journeys to potential riches around the world.

This new pokie title joins the likes of Fruit Bat Crazy, Carnaval Forever, and Faerie Spells as the 2019 additions to the overall Betsoft library. Thus far, many of the developer’s new games have received some critical acclaim from pokie reviews and players alike. 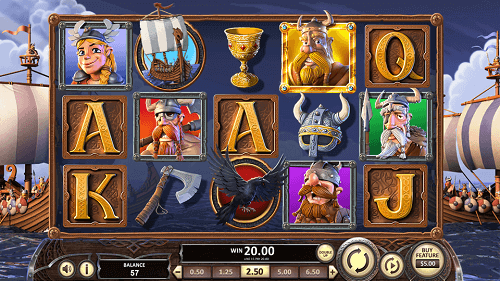 Vikings Voyage is a five-reel pokie game with a total of ten paylines. As one can expect from a Betsoft game, it is quite marvellous to look at. The intense 3D graphics and wonderful sound effects create an ambiance filled with excitement.

With Vikings being the focal point of the game, players will find that it is filled with all sorts of Scandinavian lore. Symbols consist of all sorts of Viking designs, including battle-worn axes, horned helmets, and even Odin’s black ravens.

Additionally, the game features multiple bonus modes. This gives players some good chances to win extra cash. Land three ship bonus symbols on the reels and you’ll win yourself some free spins. Do the same with three ravens and get some scatter wins. Play the game to find out what other secret treasures it holds in store for you.

If you are keen to try out Viking Voyage, be sure to visit any one of our recommended Betsoft casinos. They are sure to provide you with ample opportunity to try the game as well as many other titles. According to early reviews, the game is sure to be a banger.

So, for more of the latest online pokie news, keep it here at NewZealandCasinos.co.nz. We are your best source for all things casino in NZ!