Online poker is one of the most popular table games in New Zealand, with hundreds of variants available to online casino players. One variant, 3 Card Poker, is a newer twist on traditional poker. This game is played with three cards, and follows the same set up as traditional five card pokers. However, the final showdown only features three cards ranked according to standard poker hands.

The game was created by Derek Webb in 1994, and was patented in 1997. He invented the game to offer higher payouts and a good house edge, while being easy to understand by players. It was first played at a casino in Mississippi, USA after failing to gain traction in Nevada. Since then, the skills-based poker variant has become one of the most popular table games all over the world. 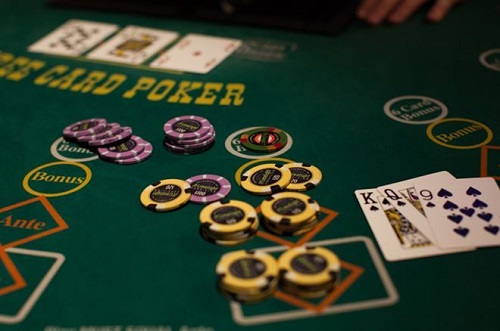 Playing the game is straightforward if you are familiar with other pokers. At the start of the game, Kiwi players can choose to make one of two wagers, Ante and Play. In some versions of 3 Card Poker, the Ante bet is compulsory. However, this will depend on the land-based or online casino where the game is played. At casinos online, this will depend on the software developer offering 3 Card Poker.

In most versions of online poker, there are certain hand ranks that decide the winner. Each game is played with a standard 52 card deck. Keep in mind that there are no ranks for different suits. Additionally, the same hands for any ranks are considered tied. So, here are the hand ranks for 3 Card Poker at NZ online casino sites.

Just like other Poker games, there are no sure-fire strategies to win every hand. However, being familiar with Poker and the hand ranks helps players to stick to their guns. Some experts advise not placing the Pair Plus bet without an Ante bet. Also, the house edge depends on the software provider and the casino offering the game.